The Erie War: When Bankers Were Brawlers 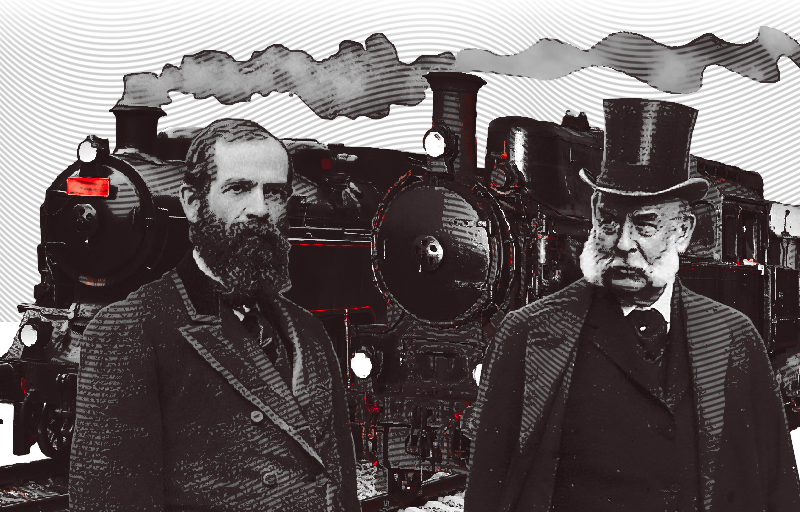 The Erie War: When Bankers Were Brawlers

Today, we think nothing of investment bankers sitting on company boards, but this wasn’t always the norm. In fact, until J.P. Morgan stepped in to help put an end to literal corporate bloodshed over a railroad dispute in the 19th century, it was virtually unheard of.

The way it all went down is a fascinating story involving stock manipulation, hostile takeovers of rail stations, a train collision, and an actual hand-to-hand, three-day battle between two companies. Grab your monocle; we're about to take a deeper look at the craziest game of Monopoly you've never heard of.

The Albany and Susquehanna: A Small Rail Line

Joseph Ramsey was a New York lawyer with a knack for financing and an eye on the post-Civil War railroad boom. With the help of local investments, he headed up the construction of the Albany and Susquehanna (A&S) railroad line in the early 1850s. The goal: to connect relatively isolated farms to the market in Albany and eventually to coal fields in Pennsylvania.

After weathering labor shortages and financial hurdles, the short line finally reached its strategic destination of Binghamton, NY in 1869. Here, the A&S could connect to four larger railroads, dramatically increasing its reach and value. But Ramsey’s arrival didn’t go unnoticed.

One of Binghamton's existing lines, the Erie Railroad, had its own share of financial troubles. Its director lost control of the company to an enterprising banker who silently bought a majority of Erie’s stocks. So the director enlisted the help of a couple of known robber-barons to help wrest control back: James Fisk and Jay Gould.

Their idea of help entailed issuing spurious shares to water down Erie stock value, eventually gaining back control of the company. The plan worked, and Fisk and Gould earned positions of power with the Erie—just as the A&S line reached Binghamton. Their way of welcoming Ramsey to town? Buying up all the A&S stock they could.

A Rapid Escalation to Hostile Takeover

Ramsey was no fool. In response to Fisk’s and Gould’s tactics, he quickly issued thousands of shares from the A&S company books to himself and his supporters to restore control. Then, he literally buried the books in a cemetery. Maneuvering to get their hands on A&S, Gould and Fisk leaned on a friendly judge to suspend Ramsey from his position as president. But with a judge in his own corner, Ramsey managed to get control of A&S awarded to a partisan recipient. Ramsey’s order passed minutes ahead of a conflicting order from Gould and Fisk, setting off widespread confusion about who was in charge of the A&S line.

At this point, Gould and Fisk were done playing nice. With a band of hired thugs, Fisk stormed the A&S office in Albany in an attempt to falsely arrest Ramsey and other board members. Instead, Fisk was falsely arrested himself—by an A&S worker disguised as a police officer.

When he was finally released from jail, Fisk was incensed. He and some 800 men stole a train in Binghamton and made their way east on the A&S line towards Albany. With a restraining order in his pocket from another friendly judge, Fisk set out to take the railroad over station by station.

The Battle of Susquehanna

As the message about the hostile takeover spread down the line, about 450 A&S men in Albany took off in their own locomotive to stop the oncoming train.

The two trains barreled toward one another on the same tracks like an opening sequence of the Dukes of Hazzard. With both sides fully committed to this game of chicken, they crashed near the Belden Hill tunnel, smashing their headlights and derailing one train. A battle ensued with “fists, tools, axehandles, and revolvers,” historian Lance Geiger explains. The A&S men were outnumbered but managed to push the fight mostly into the tunnel where the battle raged—for three days.

With neither side letting up, New York Governor John “Toots” Hoffman (seriously, you can’t make this stuff up) finally sent a state militia to end the chaos. In the end, eight to ten men were shot. Miraculously, none died. To curb the dispute, Toots temporarily placed the railroad under the control of the state.

Who Won the Spoils of the Erie War?

In need of guidance, Ramsey sought the help of A&S trustee J.P. Morgan. Morgan had dealt with men like Gould and Fisk before. Before the annual company meeting, Morgan had the company books exhumed and delivered through a back window to keep them out of Fisk and Gould’s hands. He rallied Ramsey’s stockholders, bought 600 shares of A&S, and was elected Vice President of the line. (It was rumored that he also threw Fisk down a flight of stairs, but I’m not sure if I believe that—Fisk was a pretty big dude.)

Morgan and Ramsey promptly signed A&S over to the Delaware & Hudson Railroad on a 90-year lease, putting an end to the war for the line. For his clever moves, Morgan was made director of the newly merged railroad, launching a trend in banking that continues today.

“This wedding of certain companies to certain banks—‘relationship banking’—would be a cardinal feature of private banking for the next century. It came about not because bankers were strong but because companies were still weak.” Ron Chernow, The House of Morgan: An American Banking Dynasty and the Rise of Modern Finance

If it weren’t for J.P. Morgan, the A&S line may have been lost. Instead, Ramsey kept his railroad, and Morgan ushered in an era where bankers no longer simply bankroll companies—they get down in the trenches to protect their investments.